I normally don’t post on the weekends. In fact, I make sure of it unless there is something urgent. I have been following this story for the last couple of days. At first, it seemed innocuous but as I followed it further I realized what it was. I read the story from the Washington Post, I don’t know whether they were the first to report on it or not. All I know is that the story is getting bigger the more people understands it. Obviously, it has created a great deal of polarization in our public discourse like any other story that relates to race, religion,  and sex. So I have decided to talk about it. The U.S. Army has just released new regulation for females’ hair that seem to target African American natural hairstyles. I don’t know why, but this seems fishy when I read it. So here is the story from the Washington Post:

A new U.S. Army regulation that bans an array of natural hairstyles has sparked some backlash, with African American women arguing that the rule has a racial and cultural component. Released on Monday, Army Regulation 670-1, includes multiple rules that specifically address hairstyles such as cornrows, twists and braids that are popular with African American women. Among the unauthorized styles are dreadlocks and twists, which have been banned since 2005, and braids must be small in diameter.

The Army gave their reasons why the ban is being implemented on certain hairstyles. Here is why:

According to the Army, the regulation “is necessary to maintain uniformity within a military population,” spokesman Troy A. Rolan Sr. told The Washington Post. “Many hairstyles are acceptable, as long as they are neat and conservative. In addition, headgear is expected fit snugly and comfortably, without bulging or distortion from the intended shape of the headgear and without excessive gaps,” Rolan said. “Unfortunately, some hairstyles do not meet this standard or others listed in AR 670-1. The publishing of the 2014 version helps to clarify the Department of the Army policy for proper wear and appearance of Army uniforms and insignia, as worn by officers and enlisted personnel of the Active Army and the United States (U.S.) Army Reserve, as well as by former Soldiers.”

But what spokesman Troy A. Rolan Sr. failed to mention is what are these women supposed to do with their hair? There is a White House petition going on asking the Army to review the ban, because it gives the appearance of racial favoritism for some hairstyles over others, you think. Will this work? No one knows, but first they got to collect some signatures in order for the White House to respond.

The move has prompted a White House petition that has gathered over 10,000 signatures and asks that the Army reconsider the ban. The petition states that 30 percent of women serving in the military are non-white, and “[t]hese new changes are racially biased and the lack of regard for ethnic hair is apparent. This policy needs to be reviewed prior to publishing to allow for neat and maintained natural hairstyles. Sgt. Jasmine Jacobs, who got the petition started had this to say, “kind of at a loss now with what to do with my hair. I’ve been in the military six years, I’ve had my hair natural four years, and it’s never been out of regulation. It’s never interfered with my head gear.

Here are some of the Army’s regulations: 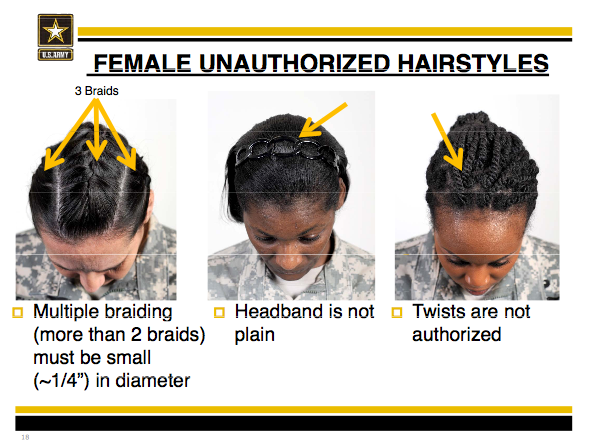 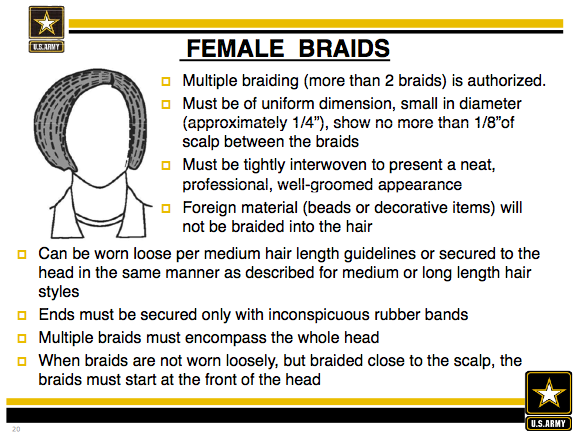 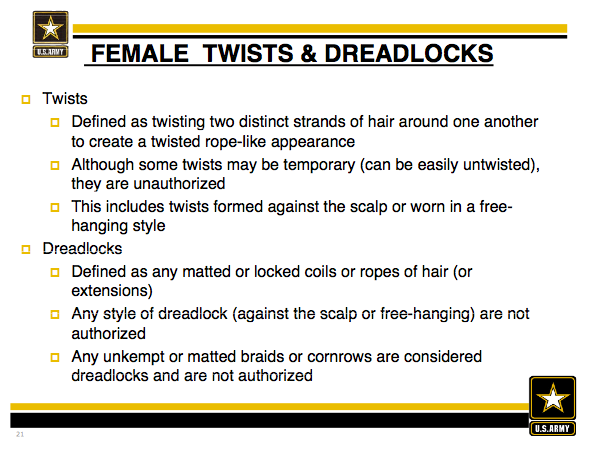 One would think with testimonials like that, they would conduct real studies before such regulations go into effect. I don’t know what the real motivation behind these regulations are. If natural hairstyles have been such a problem why haven’t the Army addressed it before, and why haven’t they point to a single instant where natural hair was the sole reason someone had gotten hurt. The reasons the Army has given so far is tenuous and pale at best and disturbingly racist at worse. I don’t know about you ladies, but this seems very ominous and motivated. Your thoughts in the comment below, is it uniformity or implicit racism? what do you think? Source: Washingpost.com

Pentagon to review policies on hairstyles

The military has said they will review their controversial grooming guidelines that led to African American women, rightfully, calling foul.